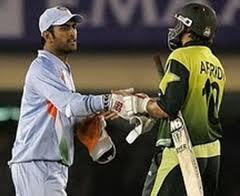 As the excitement in two countries reached fever pitch and the tension rose to near-paralysing levels, Team India turned for motivation to the man who has never seen defeat in a World Cup game against Pakistan for close to two decades now.

On the eve of the semifinal in Mohali, India’s mental conditioning coach Paddy Upton took the back seat, and the task of delivering the team talk fell on Sachin Tendulkar.

The veteran of six World Cups — during which India have got the better of Pakistan in four games — probably sensed it would be counterproductive to dwell for too long on the obvious significance of the match ahead.

Sources close to the team said Tendulkar’s talk was short but very effective. He essentially asked the boys to be calm and to stick to their natural game.

“He went back to the 2003 group game at Centurion. He spoke about how he had refused to fall into the short ball trap that the Pakistani quicks Wasim Akram, Waqar Younis and Shoaib Akhtar had laid for him, and instead played his natural game,” said a source. Tendulkar smashed 98 off 75 balls as India chased down Pakistan’s 273 with six wickets and over four overs to spare.