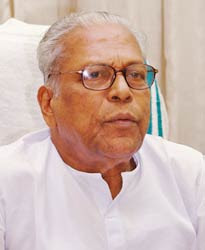 This case saw the downfall of then powerful state industries minister P.K. Kunhalikutty of the Indian Union Muslim League as a witness in the case, Regina, made alleged revelations that she was sexually exploited by the minister in the early ’90s.

Kunhalikutty stepped down as minister in January 2005 following an opposition onslaught, thanks to a media trial in the case after Regina went to the media repeating again what happened to her in the early ’90s.

The issue made headlines again Friday when a series of press conferences were held by Kunhalikutty (twice), his brother-in-law K.M. Rauf and Achuthanandan.

Kunhalikutty out of the blue told reporters at Malappuram Friday that he faces a threat to his life from his estranged brother-in-law Rauf and he might be blackmailed with a forged CD, according to what he has heard from many sources.

Hours later, at Kozhikode, Rauf in an hour-long press conference telecast live by TV channels here told reporters that Kunhalikutty got away in the ice cream sex case by influencing the judiciary and also by paying money to the witnesses.

Friday evening, Achuthanandan told reporters in response to the Kunhalikutty-Rauf spat that truth will come out one day.

‘Look, not long ago both the characters who spoke to the media today were thick pals and for some reason they have parted ways. So slowly things will come out and truth can never be hidden for long because one day, the truth will come out. We will wait and see and if need be government will look into this case and even look if there is a case for a re-investigation,’ said Achuthanandan.

Kunhalikutty, again appearing in front of the media in Kozhikode, said the allegation of his name figuring in the ice cream case has been summarily dismissed by even the Supreme Court.

‘I have no issues at all even if the case is re-investigated. I have already told Home Minister Kodiyeri Balakrishnan that I have no problems if the government is to order a probe into my wealth. It is now my need that Rauf has to be exposed,’ said Kunhalikutty.